Select a Community or

On November 17th, Sunridge Place was honoured to be part of the National Order of the Legion ceremony for resident and Canadian veteran, Fernand Labrie. This ceremony was led by the Consul General of France in British Columbia, Nicolas Baudouin. 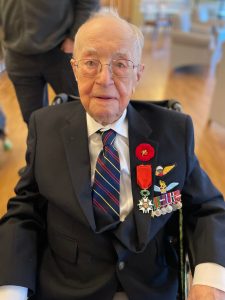 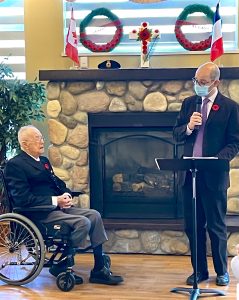 “ It is a great honour to celebrate the awarding of the Knight of the French National Order of the Legion of Honour to veteran Fernand Labrie in recognition of liberating France during World War II. During the 1942 Dieppe Raid, Mr. Labrie was a young soldier in the Canadian Forces Regiment de Maisonneuve, aboard a ship carrying TNT, to fight Nazis on the French beach.

Sunridge Place residents, staff, and management are honoured to salute Mr. Labrie on this special occasion and for sharing his vivid memories with us. We all wish him the very best.” – Al Jina, President of Park Place Senior Living 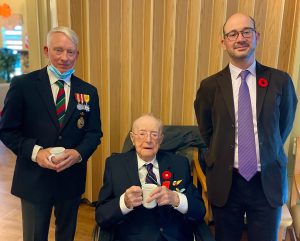 Thank you to the team at Sunridge Place Seniors Community for arranging a bilingual singer to sing O Canada and for providing refreshments during the ceremony.